Dino's Offline Adventure is a port of the modern classic built into Chrome the web browser.

Built as our first Gameboy game and developed using the Gameboy Development Kit (GBDK) this simple game is even more of a challenge on the smaller Gameboy screen.

What does it cost?

It's FREE just download and play however we would always appreciate a donation to thank us for our many hours work lovingly crafting this.

Can I buy it a physical cartridge?

Yes you can! head over to

How can I play it now?

You can download the game and play either in various Gameboy emulators, the emulator below or for the best experience if you have ability to flash games to your own cartridge then on the real hardware.

It would be great if you can take a photo and share your hiscores on twitter and facebook with the tag #doahiscore extra points for it running on real hardware!

What are the controls?

Press any button at all to play the game on a real Gameboy or in the emulator below click with your mouse or press A, S, SPACE.

Can I see the source code?

Of course, this game would not have been possible without others who have shared there code (notably SheepItUp) so all the code is available at https://github.com/gingemonster/DinosOfflineAdventure.

If you want to give us any feedback or comments please do so via the comments on this page, gaming@gingemonster.com or twitter https://twitter.com/gamingmonsteruk

Obviously this game is inspired by the one built into the web browser Chrome however no game assets were copied from the original. Any clip art and fonts used to make the game were available free for commercial use without credit.

You are free to download and use this game and source code for free but you do not have the rights to re-distribute or sell this game in any way without explicit permission.

I Make A Gameshark Code For This Game

Reply
Koop the Koopa2 years ago

Nice work! Loaded this onto my Gameboy Color via Everdrive, my high score is 70. I ran into a few issues.

The movement seems a little stuttery - the jumping movement specifically seems to be very stuccato, and it's not possible to duck (pressing down results in jumping).

I enjoyed the graphics and the way the highscore was implemented. The gameplay was not as faithful to the original as I would've liked - jumping results in your character teleporting into the air with a gradual fall. There are flying enemies which appear as frequently as cacti - you just don't jump to avoid those.

It's impressive that the game got ported in the .gb format, but I would hold off on a hardware release until you've tweaked the feel of the jumps. In the original, the duration you hold down A changes the duration of the jump; ducking was used to avoid low-flying enemies.

The main, most glaring issue which makes this unpleasant to play is the lagging frames. The cactuses seem to randomly speed up and slow down on each frame, and because there's reduced control over the jumps it makes the difference between a high score and frequently dying on the second cactus.

If this is an issue with the gameboy hardware, it could be addressed with gameplay by making it more forgiving.

This is awesome! Nice work!

Reply
Koop the Koopa2 years ago 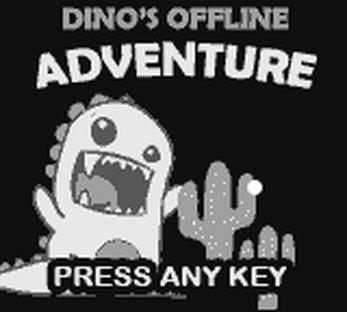